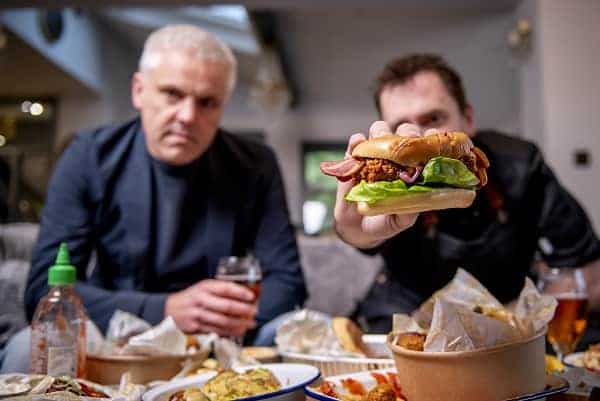 It’s difficult not to overstate the potential of VFC, the new venture from Matthew Glover, and not to be excited about what the future has in store. Even more exciting when you consider the global success of Glover’s other projects which include Veganuary and Veg Capital. Like we said before, this is going to be huge.

Having already successfully launched in the UK with plans to go international, founders Matthew Glover and chef Adam Lyons plan to disrupt intensive chicken farming in the UK and beyond, with the the intention of achieving price parity with and to eventually outprice conventional fried chicken. It’s safe to say VFC has a busy year ahead.

Matthew kindly took time out of his Veganuary schedule to chat chicken.

Please introduce your new brand – what exactly is VFC as a concept, and what is its mission?
Vegan Fried Chick*n – it’s the best fried chicken you’ve ever tasted, but vegan. We’ve launched in the UK with a D2C range which includes spicy and original fillets, bites, and ready meals which include fries and a barbecue sauce. We have a pretty simple mission, and that’s to take on the chicken industry and ultimately save chickens from the cruelty of factory farming.

Talking about mission, why is it so important for you to be a mission aligned brand?
Chickens are the most exploited land animals on the planet by far, with around 70 billion slaughtered each year for food. The vast majority of these animals are raised in intensive factory farms, like the one we recently visited in the UK. As a team, we’re focused on reducing the suffering of animals, so every time we convince one person to switch from cruelty-based chicken to vegan chicken, we’re achieving our mission.

What are your ambitions for VFC in terms of reach, availability, price, and audience?
Ultimately, we want to create a company with a global reach, which competes with conventional chicken on price, convenience and taste. We’ve started as a D2C brand for the proof-of-concept launch phase, but we anticipate being in food service and retail very soon, and already have interest from overseas markets.

How is VFC funded?
There’s rumours going around that we’re bank rolled by the vegan mafia, but I’d prefer not to comment on this.

When did you launch? Tell us a little about your story so far.
We started the company in September and launched on 20 December so it’s still very early days. With hindsight we should have taken a bit longer to prepare, but we didn’t want to miss Veganuary. We’ve struggled a bit to cope with the demand, with 200 orders going out every day and securing our first listing with The VeganKind Supermarket. And, we haven’t really started advertising yet, so we’re very pleased that we’ve had so much interest this early on.

Can you tell our readers about how the two of you first met?
Jane and I used to visit Adam’s restaurant and became regulars. We got to know Adam and his wife Katie and all the staff, and I became addicted to the Vegan Fried Chicken on the menu. When the lockdown happened, I contacted Adam, and we had a Zoom catch-up call. I expressed my sorrow at not being able to get hold of his VFC, so he said he’d freeze some and send me a delivery. It was just like the VFC I used to get in the restaurant, so I called Adam and said, “We need to talk”. That’s how it started.

We began talking through the summer, and with Covid continuing to cause problems in hospitality he decided to close the restaurant and turn it into a R&D lab, and production unit.

Most interesting is the incredible story of what happened inside a chicken farm – tell us what happened and how this affected Adam’s career path.
I’ve been undercover in factory farms before, and my mission has always been focused on the animals. I was keen that Adam shared my mission, so he agreed to come with me to a broiler farm. He’d gone vegetarian previously after doing Veganuary, and had only just switched to veganism, but the farm visit really solidified that decision for him. We were both shocked at what we found, and especially Adam who had cooked thousands of chickens in his restaurant.

Now we both share the same mission: saving animals.

Tell us about the bold branding and why this is integral to VFC.
I’ve joked a few times that we’re a global brand, which is working out of a small restaurant kitchen in York! We were keen to create a brand that looks like it means business, because we do mean business. We hired a big agency to create an ethical food brand with a strong point of view that can capture a mainstream flexitarian audience. We felt it was important to be bold, confident, edgy and completely honest, as not enough brands do that very well. Our brand is about positive rebellion, and there are a lot of rebels out there keen to join us on this journey.

What about the product itself – tell us how it is made?
Our Vegan Fried Chick*n pieces are made from wheat protein in a southern fried and crispy cornflake coating. And they’re made by chefs in our restaurant facility in York.

Matthew, what in particular did you learn from your experience in your other vegan endeavours such as Veganuary and Veg Capital, and how were these lessons used to form this new company?
I’ve learnt a lot from both ventures. With Veganuary, we’re mostly focused on the demand side, encouraging people to switch away from animal to vegan products. In the early days, it was clear that if the vegan foods on offer are not good enough then it’s more difficult to keep people on board. Through Veg Capital, I started working on the supply side, and helping promising vegan businesses access capital to grow so that they can help lower the bar for people interested in a vegan diet.

Through speaking to such inspirational founders, it sort of scratched an itch for me to get involved in a startup myself, hence partnering with Adam on VFC.

How big will you go with VFC?
I’m 48 years old and see VFC as potentially my final business venture, so I’m going to put full commitment in for as long as I can. It’s a cliché for entrepreneurs to say they’re thinking big, and most don’t get there. We’ve got some great backers, and we’ve had a good start, so we’ll do our best and see where it gets us.

I’m not really interested in making millions, but if we can save millions of chickens then that seems like a worthy cause to me.