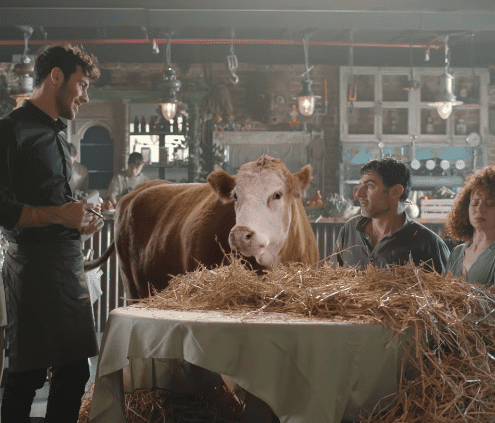 Vegan Friendly, an Israeli nonprofit, is bringing its groundbreaking brand of vegan advocacy to the US for the first time. After successfully increasing access to plant-based food and raising awareness of factory farming in Israel and the UK, the group is opening its first US branch in New York City. Beginning next month, Vegan Friendly will also air a new ad campaign, “Hell of a Steak”, on US primetime television.

Founded in 2012, Vegan Friendly uses high-tech R&D to promote veganism through multiple creative platforms, including social media, billboards, ad campaigns, and large events, reports Israel21C. The self-sustaining organization has developed a number of successful projects, including the purple Vegan Friendly certification seal, which is carried on 8,000 vegan food products and 2,000 hotels, restaurants and businesses throughout Israel. In the UK, the seal can be found on 2,000 products and 1,200 locations of 500 different businesses.

A model of success

The group also runs the Vegan Active Club, where members can choose to support a TV or billboard ad campaign with a pledged donation each month. The club currently includes 6,000 Israeli members who donate a total of $75,000 every month, and are rewarded with discounts to Vegan Friendly-certified businesses.

The group has amassed an extensive social media reach, with 220,000 social media followers in Israel and 150,000 in the UK.  “The problem of factory farming is global,” states Vegan Friendly founder Omri Paz. “Our campaigns got the attention of international organizations and donors and they pleaded with us to expand to other countries.”

In the US, Vegan Friendly’s new branch will consist of five social media specialists and project managers. Its first American ad campaign, “Hell of a Steak” depicts the environmental costs of beef farming and will begin airing in June.

“We always thought it would be impactful to be in the United States, working with the world’s biggest corporations, donors and celebrities,” Paz comments. “But we waited until we had a successful proof of concept in the UK before taking the big leap from Israel to the US.”