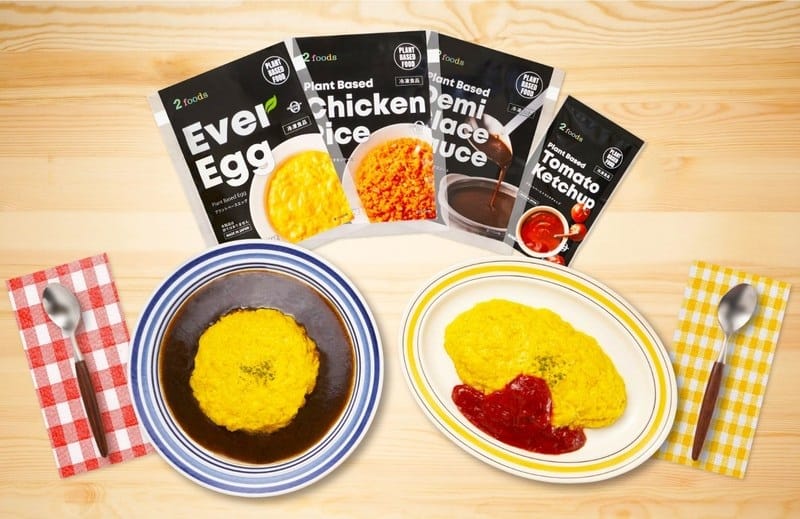 Japan’s 2foods reports to vegconomist that it has joined forces with Kagome Co., Ltd., to launch 2foods Plant-Based Omurice. Omurice is a popular omelette based Japanese comfort food, and this product has been created with “Ever Egg”, a joint development between the two companies, said to be the first vegan egg in Japan.

Ever Egg is a zero cholesterol product created with vegetable ingredients such as carrots and cannellini beans. Using a proprietary technology called the “Vegetable semi-ripening method”, whose patent is pending, the companies say they have achieved the “soft, fluffy texture similar to omelettes made from real eggs” in a way which they claim was previously not possible.

2foods Plant-Based Omurice is now available for pre-order on Makuake, a Japanese product launch platform where consumers can pre-order the newest innovations on the market and which is frequently used by large corporations to introduce their new products to the market. Through the platform, TWO and Kagome aim to “lead, and accelerate, the growth of the plant-based foods market in Japan”.

The Omurice will be offered as part of the menu at all six 2foods locations, and will be made available across more channels before the end of the year. The two companies will continue to work together in bringing innovative plant-based products to consumers around the world.

TWO, the company behind 2foods, last year agreed a business alliance with Kagome, a global manufacturer and distributor of condiments, foods, and beverages. The new product is the first launch arising from this partnership, which you can read more about here.

Yoshio Yahagi of TWO inc. stated to vegconomist this January: “Since April 2021, we have been able to collaborate with Kagome with a sense of speed, taking advantage of each other’s strengths from idea planning to product development. We were very surprised by the strong sense of unity between Kagome’s management team and the frontline, and the flexibility and speed of the project, which was different from the image we had imagined for a large company.”